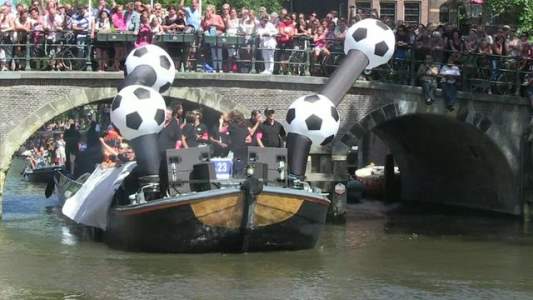 The city of Amsterdam in Holland is undoubtedly the city's most advanced human rights and respects homosexuals as sexual minorities. Already in 2001 ... Holland recognized gay marriage equal to heterosexuals marriage.
August 2013, an heterosexual football team cames to assist and support the GLBT in recognition of their rights just because they are simply humans beings and want them to be respected.

We know that sexual orientation of each individual is innate, that each human has a different sexual attraction as each human is genetically different physically: hair color, colour’s eyes etc. ....

Different researches in the past years (Kinsey-USA 1948) (Geir Soli-Sweden 2006) (Balthazart-Belgium 2010) (Rice & Frieberg & Gavrilets-USA 2012) reached the same conclusion that humans are mostly bisexual in different degrees and this is all about genetics.

Homophobic repression against homosexuals is simply a crime and denotes people who repressed their own homosexuality.

This support from dutch footballers gives the tone for the world that we must recognize homosexuals as fully human, if not, this is discrimination on the basis of sexual orientation sexual and it contravenes the Universal Charter of Human Rights signed by most countries including Russia.

Hope that Putin will respect the rights of its own Russian citizens (90% + + with homosexual attractions) over his electoral interests or pride fueled by power.