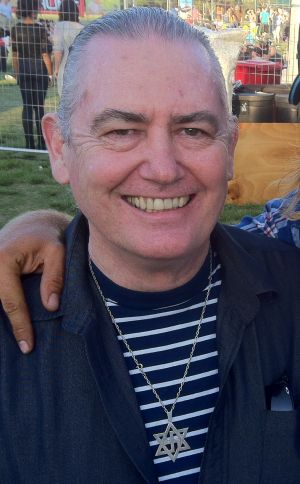 Another GREAT Pride Fair Day (21st September) here in Brisbane. Brisbane Pride has been moved from Winter to Spring, which is more appropriate weather-wise. In another exciting development the March came down Brunswick Street, New Farm, right past my house. New Farm has long been considered a gay enclave. It’s an indication of how times have changed and much has been achieved that the March and Fair Day have arrived home. I was reminded of when I marched with dear Pierre-Paul and the Montreal Raelians for Canadian Pride in 2005 and we entered into Sainte-Catherine Street, the gay district of Montreal. It’s great to see a coming of age emerging in the communities here. Same-Sex Marriage has been high on the agenda for change in Australia and achieving increasing success, despite ongoing conservative governments.

As usual, the Dykes on Bikes led the march today, followed by a huge rainbow flag. The main chant was "Equality Now". It was a very colourful, rowdy and exciting parade with many people marching and a few decorated vehicles, including prams and some kids on kick scooters. The march arrived at New Farm Park around 10.45am and entered the Fair Day area. Interesting to note that later in the day there was a Muslim woman in full hijab pushing a double pram with twins...quite unusual for such an event.

This year’s was perhaps the most beautiful Pride Fair Day, as it was held in the historic New Farm Park, famous for it rose gardens and jacaranda trees. The jacarandas are starting to bloom earlier than usual and lent extra colour to the day. The Spring weather was perfect with a breeze blowing our postcards and stickers around at times.

The ARAMIS stall was often photographed, especially the main sign, Gay is Out There – God is Not. Given recent changes of attitude from the Vatican we decided to swap our planned slogan on religious homophobia to Gay Is Out There – God is Not. It was an attention-getter and drew people in. Despite the new attitude from Pope Francis the Vatican has a long way to go to catch up with the 21st century. Australia’s Cardinal Pell announced that the Pope's comments on homosexuality have to be taken in context (read watered down, or in Pell's case, ignored).

We gave out many apostasy forms to enthusiastic recipients. Doc sold books. We all enjoyed many great conversations and strengthened our connections with key community figures such as the editor of QNews and the president of LGBT History Action Group. I was delighted to have a photograph with ‘Big Brother’ television star David Graham. He has done a great deal to promote a positive view of homosexuality in this country.

So much glorious self-expression was on view with amazing costumes and wonderful outfits on people of all shapes and sizes manifesting the unlimited array of genders; always a refreshing and inspiring experience. As Zabou noted, "It's a taste of the way life will be everywhere one day".

Thanks to the wonderful team, Saul, Zabou and Doc, who contributed their big smiles, love and knowledge to all who came our way.

Happy Pride to All